Posted by GreenDog on Tuesday, 20 September 2022 in Climate Change 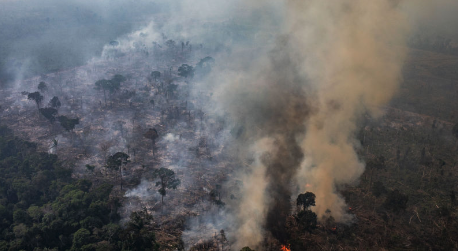 By Nadja Popovich and Brad Plumer

Across the Western United States, wildfires are growing larger and more severe as global warming intensifies. At the same time, new data shows, more Americans than ever are moving to parts of the country more likely to burn, raising the odds of catastrophe.

In 2020, more than 16 million homes in the West were located in fire-prone areas near forests, grasslands and shrublands, where the risks of conflagration are highest. That’s a rise from roughly 10 million homes in 1990, according to research from the University of Wisconsin-Madison and the U.S. Forest Service.

“That’s the perfect storm,” said Volker Radeloff, a professor of forest ecology at the University of Wisconsin-Madison, who helped lead the research. “Millions of houses have been built in places that will sooner or later burn,” he said, even as climate change increases the risks of major wildfires across the West with extreme heat and dryness.

Nowhere is this dynamic more visible than in California, where eight of the largest blazes on record have struck in the past five years. The state now has roughly 5.1 million homes in what’s known as the “wildland-urban interface,” the term for areas, often on the outskirts of cities, where houses and other development are built near or among flammable wild vegetation.

Areas such as the foothills of the Sierra Nevada saw especially fast growth over four decades, despite repeated wildfires disasters. When wildfires erupt, they tend to inflict most of their damage in these transitional zones where homes and businesses encroach on otherwise undeveloped wilderness.

Examples include the Camp fire in 2018 that incinerated the forest-surrounded town of Paradise, Calif., or the Woolsey fire that same year, which tore through shrub- and grasscovered canyons northwest of Los Angeles and burned more than 1,600 structures. The Mosquito fire has torn through the dry, hilly terrain northeast of Sacramento this month, damaging buildings and triggering evacuation orders for more than 10,000 people.

There’s no single reason for the explosion of development in the wildland-urban interface, or WUI (pronounced “woo-ee”). Some people move to live closer to nature, or because costs are lower. In California, many cities have restricted development in denser downtown areas, exacerbating the state’s housing crisis and pushing people to the outer fringes.

“By and large, most new development housing construction in California has been going on in the periphery of existing urban areas,” said Karen Chapple, a professor of city and regional planning at the University of California, Berkeley, and co-author of a report on rebuilding after wildfire disasters. “It’s happening because that’s where the land is cheap. So we end up putting housing in these very vulnerable areas.”

Similar trends can be seen throughout the West. In Colorado, the number of homes built in the wildlandurban interface has nearly doubled to more than 1 million since 1990. Some of the fastest growth has unfolded along the Front Range, where the number of large, high-severity fires has increased in recent decades.

Texas now has 3.2 million homes in the WUI and saw the fastest growth of any state over the past decade. Although some of Texas’ most destructive wildfires have been in forests, many of its wildlands consist of grasses and shrubs, where fires can spread more rapidly and often damage more homes. Last year, the state climatologist’s office warned that wildfire risks were growing as the state dries out.

The rapid growth of housing in flammable areas is a key reason wildfires have become more destructive over time. Not only are the homes themselves more likely to burn, but when more people live near forests and grasslands, there’s also a greater chance that fires will start in the first place. Although wildfires are often sparked by lightning, humans cause the vast majority of ignitions, often by accident: a cigarette thrown out the window, or a vehicle’s muffler setting fire to dry grass.

More homes in fire-prone territory also increases the demand for firefighting in often difficult terrain, which can stretch fire suppression resources thin and, in turn, lead to a dangerous buildup of vegetation in areas that experts say would benefit from burning at low levels more frequently. Wildfires have long been a natural part of the Western landscape and only become disasters when humans are in the path.

“The more homes we have in the wildlands, the more people we have to protect, more people that need to be evacuated,” said Miranda Mockrin, a research scientist at the U.S. Forest Service, who worked on the new study. “It becomes more of a challenge.”

In 2008, California adopted some of the strictest rules in the country for new homes in high-risk fire areas, requiring developers to use fire-resistant materials and to provide access to water for firefighters. Those rules can make a difference. After the Camp fire, one analysis found that about 51% of the 350 single-family homes in Paradise built to the new codes escaped damage, compared with just 18% of the 12,100 homes built before the standards.

Most Western states don’t have statewide codes, however, and it is usually up to local governments to enforce their own standards.

There are signs that things may be changing. After the Marshall fire in Boulder in late 2021 destroyed more than 1,000 buildings, lawmakers in the state began discussing new statewide codes, although they have yet to adopt any. And over the past decade, California has actually added more homes outside the WUI than within it. Radeloff said it was still too early to tell whether that’s a sign of changing attitudes toward fire risk.

“It’s a beautiful place to live,” Radeloff said of the wildland-urban interface. “But as a society, we really have to wrap our heads around what living so close to nature really entails.”