A Forecast for Food Production 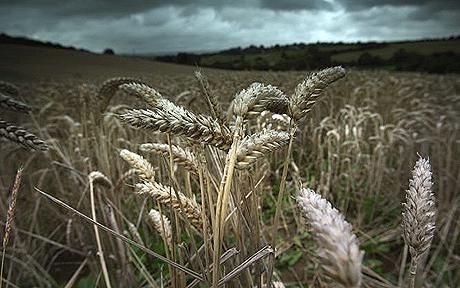 I believe we might have made a mistake: a mistake whose consequences, if I am right, would be hard to overstate. I think the forecasts for world food production could be entirely wrong. Food prices are rising again, partly because of the damage done to crops in the northern hemisphere by ferocious weather. In the US, Russia and Ukraine, grain crops were clobbered by remarkable droughts. In parts of northern Europe, such as the UK, they were pummelled by endless rain.

Even so, this is not, as a report in the Guardian claimed last week, "one of the worst global harvests in years". It's one of the best. World grain production last year was the highest on record; this year's crop is just 2.6% smaller. The problem is that, thanks to the combination of a rising population and the immoral diversion of so much grain into animal feed and biofuels, a new record must be set every year. Though 2012's is thethird biggest global harvest in history (after 2011 and 2008), this is also a year of food deficit, in which we will consume 28m tonnes more grain than farmers produced. If 2013's harvest does not establish a new world record, the poor are in serious trouble.

So the question of how climate change might alter food production could not be more significant. It is also extremely hard to resolve, and relies on such daunting instruments as "multinomial endogenous switching regression models". The problem is that there are so many factors involved. Will extra rainfall be cancelled out by extra evaporation? Will the fertilising effect of carbon dioxide be more powerful than the heat damage it causes? To what extent will farmers be able to adapt? Will new varieties of crops keep up with the changing weather?

But, to put it very broadly, the consensus is that climate change will hurt farmers in the tropics and help farmers in temperate countries. A famous paper published in 2005 concluded that if we follow the most extreme trajectory for greenhouse gas production (the one we happen to be on at the moment), global warming would raise harvests in the rich nations by 3% by the 2080s, and reduce them in the poor nations by 7%. This gives an overall reduction in the world's food supply (by comparison to what would have happened without manmade climate change) of 5%.

Papers published since then support this conclusion: they foresee hard times for farmers in Africa and south Asia, but a bonanza for farmers in the colder parts of the world, whose yields will rise just as developing countries become less able to feed themselves. Climate change is likely to be devastating for many of the world's poor. If farmers in developing countries can't compete, both their income and their food security will decline, and the number of permanently malnourished people could rise. The nations in which they live, much of whose growth was supposed to have come from food production, will have to import more of their food from abroad. But in terms of gross commodity flows the models do not predict an insuperable problem.

So here's where the issue arises. The models used by most of these papers forecast the effects of changes in averaged conditions. They take no account of extreme weather events. Fair enough: they're complicated enough already. But what if changes in the size of the global harvest are determined less by average conditions than by the extremes?

This is what happened in 2012. This is what seems likely to happen in subsequent years. Here's why. A paper this year by the world's leading climate scientist, James Hansen, shows that the frequency of extremely hot events (such as the droughts which hammered the US and Russia)has risen by a factor of about 50 by comparison with the decades before 1980. Forty years ago, extreme summer heat typically affected between 0.1 and 0.2% of the globe. Today it scorches some 10%. "We can project with a high degree of confidence," the paper warns, "that the area covered by extremely hot anomalies will continue to increase during the next few decades and even greater extremes will occur." Yet these extremes do not feature in the standard models predicting changes in crop production.

If the mechanism proposed by another paper is correct, it is not just extremes of heat that are likely to rise. I've explained this before, but I think it's worth repeating. The jet stream is a current of air travelling westwards around the upper northern hemisphere. It separates the cold wet weather to the north from the warmer, drier weather to the south. Wobbling along this ribbon are huge meanders called Rossby waves. As the Arctic heats up, the meanders slow down and become steeper. The weather gets stuck.

Stuck weather is another way of saying extreme weather. If the jet stream is jammed to the north of where you are, the weather stays hot and dry, and the temperature builds up – and up. If it's lodged to the south of you, the rain keeps falling, the ground becomes saturated and the rivers burst their banks. This summer the UK and the US seem to have found themselves on opposite sides of stuck meanders, and harvests in both countries were savaged by opposing extremes of weather.

This is where we stand with just 0.8 degrees of global warming and a 30% loss of summer sea ice. Picture a world with two, four or six degrees of warming and a pole without ice, and you get some idea of what could be coming.

Farmers in the rich nations can adapt to a change in averaged conditions. It is hard to see how they can adapt to extreme events, especially if those events are different every year. Last winter, for example, I spent days drought-proofing my apple trees, as the previous spring had been so dry that – a few weeks after pollination – most of the fruit shrivelled up and died. This spring was so wet that the pollinators scarcely emerged at all: it was the unfertilised blossom that withered and died. I thanked my stars that I don't make my living this way.

Perhaps there is no normal any more. Perhaps the smooth average warming trends that the climate models predict – simultaneously terrifying and oddly reassuring – mask wild extremes for which no farmer can plan and to which no farmer can respond. Where does that leave a world which must either keep raising production or starve?

A fully referenced version of this article can be found at www.monbiot.com